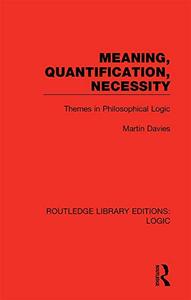 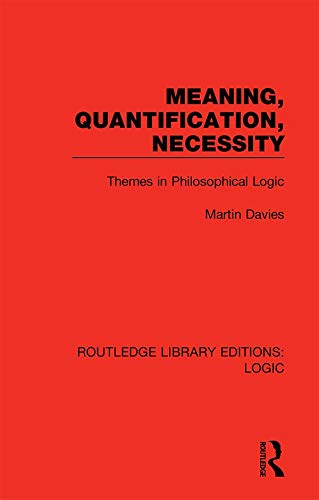 Meaning, Quantification, Necessity: Themes in Philosophical Logic (Routledge Library Editions: Logic) by Martin Davies
November 12, 2019 | ISBN: 0367418029 | English | 296 pages | PDF | 24 MB
Originally published in 1981. This is a book for the final year undergraduate or first year graduate who intends to proceed with serious research in philosophical logic. It will be welcomed by both lecturers and students for its careful consideration of main themes ranging from Gricean accounts of meaning to two dimensional modal logic.

The first part of the book is concerned with the nature of the semantic theorist’s project, and particularly with the crucial concepts of meaning, truth, and semantic structure. The second and third parts deal with various constructions that are found in natural languages: names, quantifiers, definite descriptions, and modal operators. Throughout, while assuming some familiarity with philosophical logic and elementary formal logic, the text provides a clear exposition. It brings together related ideas, and in some places refines and improves upon existing accounts.