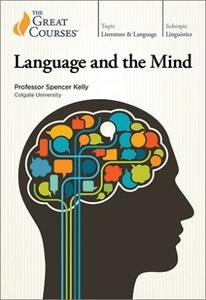 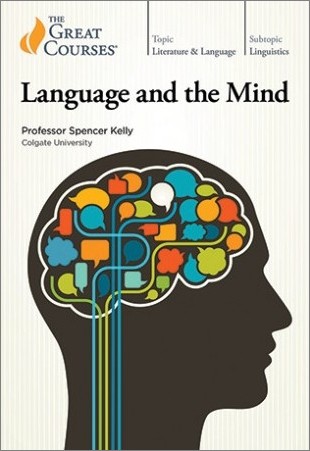 Language is the ultimate invention of Homo sapiens—one that has allowed us to change the physical and social world around us in every conceivable way, and an invention that has fundamentally changed us, as well. Research has shown that whether we’re sighted or blind, hearing or deaf, one or one hundred years old, communication through language is a fundamental part of what it means to be human.

In 24 fascinating lectures, Dr. Spencer Kelly, Professor of Psychology and Neuroscience at Colgate University, reveals the astonishing dimensions of the human brain and cognitive development in relation to language. Did you know that language is probably not built into our brains at birth, but that we have some innate abilities that allow us to create linguistic minds—given the right environment—over the course of our lives? Or that universal aspects of language follow common developmental patterns, no matter where you are? Do you know the true extent of how radically language has transformed the human brain, and that the tools it gives us are unique to humans as a species? And, new discoveries are being made all the time. Only recently, brain-imaging studies have demonstrated that, neurally, there is very little difference between signed languages and those that are spoken. These questions and observations are just the tip of the proverbial iceberg when it comes to the human capacity for language and its effect on every aspect of our lives.

Language and the Mind is a fascinating journey into so many aspects of life we take for granted every day: our ability to remember the past and imagine a future, a healthy baby’s ability to learn its native language without direct teaching, our use of hand gestures and facial expressions in communication, and so much more. It’s a deep dive into the fascinating experiments that have only recently been able to tease out an understanding of language and how we learn.

Humans do not come equipped with a “language gene.” Neither is there one single gene for empathy, schizophrenia, religious faith, or any of our other complex behaviors. We do have a group of genes that are used for language, however. And while we share these same genes with many other animals, we are the only species in which they are used for language.

Despite longstanding misconceptions, we don’t have one single “language area” of the brain, either. What we do have is a brain that is language-ready at birth, with the most significant aspect of that readiness being plasticity. Neuroplasticity is our brain’s ability to change its neural connectivity over time in response to our experience and environment. If a particular neural connection produces useful behavior, that connection is strengthened. If it’s very useful, it might even sprout new connections to strengthen it further. But if a connection no longer serves a useful function, it is weakened or even eliminated. Without plasticity, there is no learning; it is the ultimate innate, general-purpose mechanism.

Neuroplasticity is also our ultimate survival mechanism. Because our physical and social environment is so complex, it wouldn’t be possible to genetically pre-program everything we need for survival. Instead, evolution has provided us with a plastic brain so we can learn those things on our own. And as you’ll discover in Language and the Mind, that learning begins on day one.

Humans are certainly not the only animals that communicate in sophisticated ways. From the blue whale to the ant, animals communicate via vocalizations, chemical emissions, physical touch, feather displays, body positioning, jumps, stomps, dance, and more. There seems to be a limitless variety of communication methods in the animal kingdom.
But this communication about food, sex, social structure, or danger is almost always innate, with species-specific communication systems hard-wired into the brain. Even when communication patterns must be learned from parents or others in the group—e.g., non-human primates, songbirds—the functions are narrow, and the set of communication signals are fixed per species.
But humans are different. As Dr. Kelly explains with fascinating examples throughout this course, almost every aspect of human language separates us from other animals, including:

We can and do talk about anything and everything, not limiting ourselves to topics necessary for survival. Some animals can communicate more broadly than others, but none can remotely rival the breadth of our communication topics.
We are not born with language. No matter which of the over 7,000 spoken languages or hundreds of signed languages are used in their home, human babies must learn that language.
We are able to talk about talking, think about thinking, and learn about learning. This reflexiveness, or metacognition, separates us from every other animal in the world.
Human beings lie. Many other animals exhibit innate behaviors for the purpose of misleading others, but no one can lie like we do. We have the ability to know one thing and yet use language to declare that something else entirely is true.

In examining language, you will learn about phonemes, syntax, semantics, and many other aspects of language, why they are important, and how they fit together with brain function to create our ability to use language. You will discover how language and the mind have emerged from a synergy of our genes, brains, bodies, and environment. You will discover that just as hearing babies living in a speech-filled environment begin to babble at about six months of age, babies who are deaf living in a signing-rich environment begin to babble in sign at about that same age.
But in addition, Dr. Kelly takes us deeper into the biggest questions about the mind, the brain, and what we perceive to be reality. Using the most recent findings from linguistics, psychology, and neuroscience research—some of which are so new they are still being debated—you will ponder the deepest questions, including:

What gives the human mind the ability to use language? Where did it come from and how did it develop, both in our species as a whole and within each one of us as individuals?
During the evolutionary process, did the brain adapt to language or did language adapt to the brain?
If language has a “home,” does it live only in our head or also outside of it?
Does language itself influence thought? Or is it a vehicle for social and cultural forces that influence thought?
Given your individual neural architecture, do you experience the same world as anyone else? Is that even possible? Does it matter?

These are just some of the compelling questions you will consider as Dr. Kelly explains the fascinating experiments that have teased out answers to some of the most basic questions about Homo sapiens. As you follow along, you may find yourself intrigued, surprised, and enthralled, all because you possess the power of language. 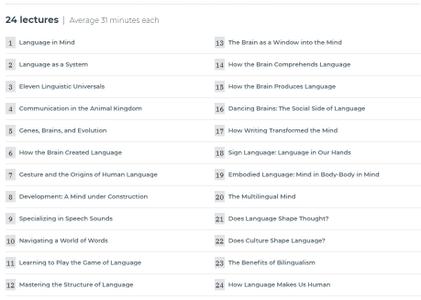 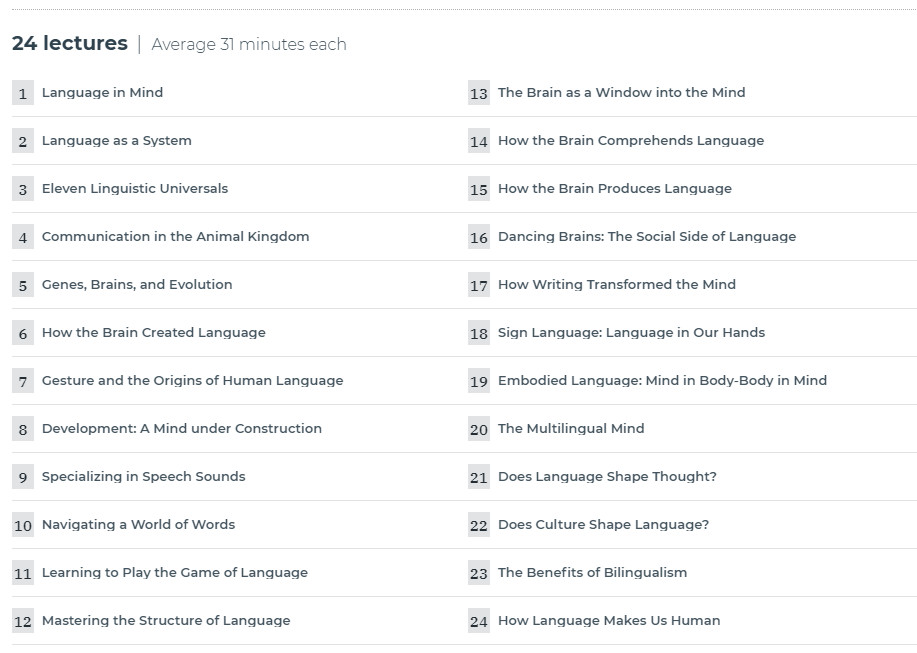 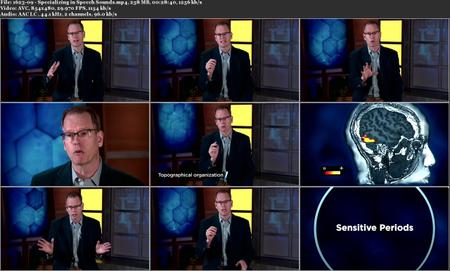 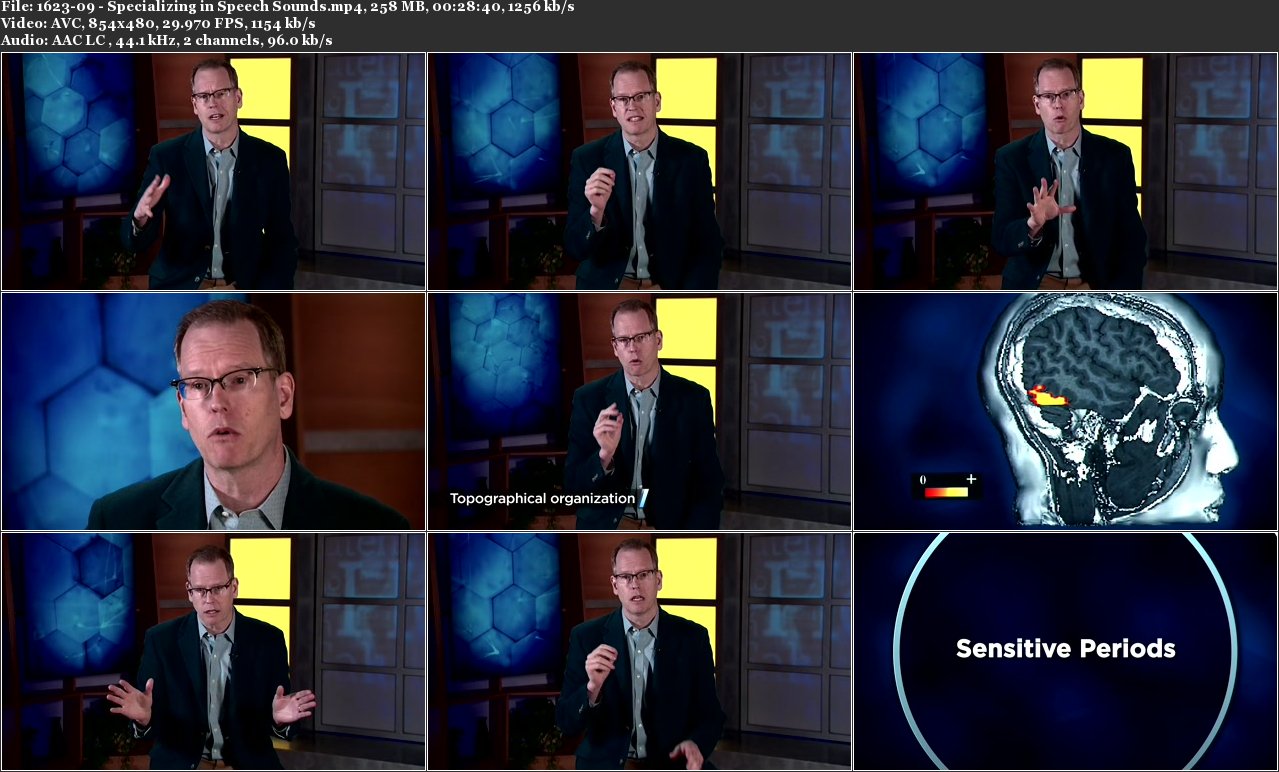