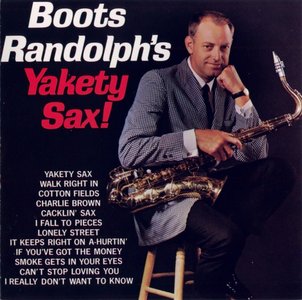 Boots Randolph's signature tune, "Yakety Sax," was inspired by the sax solo in the Coasters' "Yakety Yak," and is much better known than its modest chart placement might suggest. Randolph had recorded "Yakety Sax" for RCA several years earlier without success, but his Monument recording clicked in 1963 and the accompanying gold-selling album spent nearly a year on the charts. Randolph's unique status as the man who popularized the saxophone in Nashville is reflected in half an album's worth of country songs like "I Fall to Pieces" and "If You've Got the Money." Randolph acknowledges the Coasters again on a version of "Charlie Brown," and gives the commercial folk craze the nod with renditions of "Cotton Fields" and "Walk Right In."