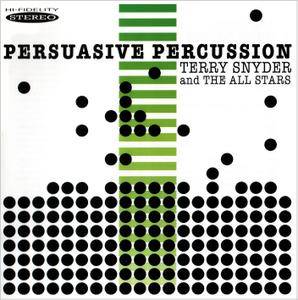 When first released in 1959, PERSUASIVE PERCUSSION was probably the first to put stereo discs on the map bringing to light the startling and innovative musical aspects of stereo sound on records. The music was brilliantly recorded and arranged with great imagination and infinite care to bring out the whole spectrum of sound on one's stereo equipment. Originated and produced by Enoch Light, the album presented an entirely new concept in the recording of percussion instruments performed by Terry Snyder and The All Stars which included talent such as Tony Mottola, Dick Hyman and Willie Rodriguez.