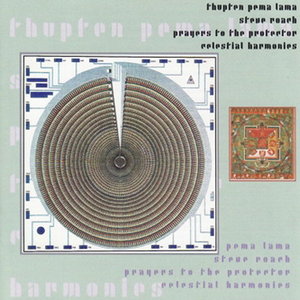 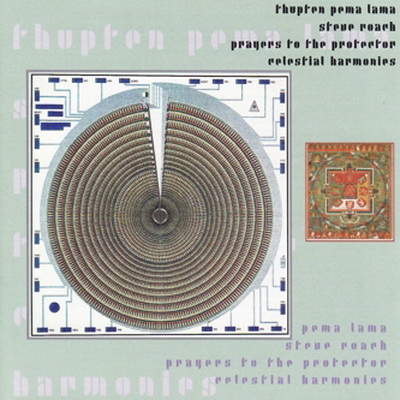 It was inevitable that synthesist Steve Roach would apply his soundscape designs to the deep, ancient, and often harrowing chants of Tibetan Buddhist monks. He's gone into the primal core with Aboriginal sounds and cultures on albums such as Dreamtime Return, and his Magnificent Void CD stepped into the abyss. On Prayers to the Protector, he works with the chants of Thupten Pema Lama of the Dip Tse Chok Ling Monastery. In Roach's studio, Thupten Pema Lama sang these devotional prayers and entreaties unaccompanied. Then Roach slipped them into his own soundworld, surrounding the monk with evanescent waves of synthesized ambiences. Being Steve Roach, this isn't the usual pretty New Age synth-glissandos, but darkly hued textures with metallic edges. On "Djewa takgya lingchee lhunbur dje" (a prayer for the world, according to the liner notes), he evokes the metal gongs and bowls of Tibetan chants as well as a freight train putting on the brakes in space. Prayers to the Protector doesn't dress up Buddhist chants, it just sends them into deeper space.

The relationship between Thupten Nyandak Pema Lama and Celestial Harmonies goes back to the mid-eighties when producer David Parsons recorded the first album by the monks of the Dip Tse Chok Ling Monastery, Sacred Ceremonies, in Dharamsala, India, for Fortuna Records. At the time of this writing, there are three volumes in the Sacred Ceremonies series, with more in various planning stages. The recordings have been well received by a wide audience in many countries, from lay people interested in Buddhist culture to followers of the religion to listeners like director Bernardo Bertolucci who used some of their chants in Little Buddha.

Likewise, Steve Roach's relationship with Fortuna Records and thus Celestial Harmonies goes back to the mid-eighties, and Roach has since assembled a veritable catalogue of recordings in his inimitable style of electronic and acoustic/electronic music.

"In Paris, I heard a recording of Tibetan singing with this more modern music, and I thought someday I would like to do this myself," Thupten said almost immediately. Steve set up a microphone and Thupten proceeded to sing from the Lama Chopa that he carries with him wherever he goes. Some of these chants are devotions to the gurus and deities who assist seekers on the path to enlightenment. Others are prayers to the protectors who deflect evil influences and cleanse the world of imbalances, negative emotions and ego-driven states of mind. The chants, which are sung formally at the monastery by all the monks twice a month, are an integral part of the individual's practice. Thupten told us that he recites these prayers alone at least once a day, sometimes letting them flow silently through his mind, other times feeling the compassion and strength they provide rising from his own voice. He sang his favorites during that impromptu session in the Timeroom. An hour later, after he closed his prayer book and recorded a brief interview, it was time for him to go. While there is an enduring quality of great power and comfort in these age-old chants, Thupten Pema Lama felt that Westerners and young monks taking the tradition into the 21st century would benefit from hearing them in an updated setting.

For Steve, it was an unexpected challenge: from the afternoon of December 31, 1999 through the first 18 days of 2000, he held vigil in the Timeroom, creating a sacred sonic space worthy of supporting, and at certain moments amplifying, the feelings of devotion, compassion, protection and unfathomable mystery resonating throughout Thupten's recitations. "When the chants were originally recorded, Thupten and I talked about how we could bring them to the West in a context of clear and direct understatement," Steve remembers. "I waited for the right moment to bring my own soundworlds into the picture, for a time when I was ready to devote myself to the task with the reverence it deserved. During those first weeks of a most auspicious new year, I absorbed Thupten's chants from day into night, adding sounds from the deep well of inspiration these ancient chants inspired in me, stripping away what was unnecessary until finally the circle was complete. Considering the way in which the initial idea practically came knocking on my door, and the place I had to go in myself to contribute to the project, Prayers to the Protector is for me a very special release."

1 Gyab Do (Refuge Prayer For All Sentient Beings) / Ganden Lhagya (Prayer For Tsonkhapa, The Founder Of The Gelugpa Sect) 2:08
2 Dechen Ngangle Rangnyi Lama Le (Blessing Of The Place Of Meditation) 15:01
3 Djew Takgya Lingchee Lhunbur Dje (Prayer For The World Or Planet) 8:48
4 Tokme Dune Meeke Dikbeele (Purification Prayer To Dissolve All Sins Committed In Past Lives) 8:32
5 Prayer To The Protector (Instrumental) 4:58
6 Yonden Jungne Tsultrim Gyatso Dje (Prayer To Wisdom, To Knowledge And Religious Vows) 13:57